rogueHAA recently entered a competition for the upcoming DLECTRICITY festival. For two nights in October, the Woodward Corridor will be filled with light-based art, installations, and performances as invited artists and designers create site-specific work that will activate the evening streetscape. Our project proposal is currently under review but we should have a decision soon so stay tuned.

Below is an excerpt from the project statement:

LIGHT TERRAIN   Ignasi de Solà-Morales defines terrain vague as land in a “potentially exploitable state but already possessing some definition to which we are external,” or “strange places” that “exist outside the city’s effective circuits and productive structures.” Detroit is an often cited characterization of Sola-Morales’ concept, yet these “strange places” are typically understood as either unacceptable results of economic decay, or as sites of optimistically unrealistic potential, divorced from the realities that created them. Our installation seeks to bring a more nuanced approach to Terrain Vague that both recognizes the realities of urban vacancy while maintaining the possibility inherent within. By creating a space for interaction and conversation, our installation attempts to both literally and conceptually establish a provisional ‘ground’ for interaction among DLECTRICITY viewers that strikes a balance between planned and spontaneous, solid and void, architectural object and landscape.

ARTIFICIAL TOPOGRAPHY   Comprised of an articulated landscape of illuminated spheres, this installation seeks to catalyze interaction through the application of a responsive architectural skin to existing building and ground conditions. Like an luminous synthetic ivy, the installation will expand across the site in an organic field both defining new spatial potential and enhancing the existing context – literally and conceptually tying architecture to landscape. Each individual piece will be attached to a lightweight substructure that will be strung between stakes at the ground and a custom fabricated armature at the building surface. This armature will allow for the precise location of elements without compromising the existing building surface.

MULTI-SCALAR ENGAGEMENT   Through the use of LED lighting connected to passive infrared (PIR) motion sensors, the surface will literally record and respond to occupation in the space. While maintaining a base level illumination throughout the duration of the installation, the surface will become ‘excited’ by participants’ proximity and raise illumination levels locally to provide a zone for pause and conversation. As individuals move on, the lighting levels return to their previous condition. When viewed from a distance, these localized responses create a continuously changing landscape that echoes the occupation of the site and provides a visual indication of physical zones of activity.

CONTEXT Located at the highly visible corner of Woodward and Warren, the project will engage both pedestrian as well as automotive traffic, encouraging participation and drawing passersby into the space. The existing two blank facades will become activated by the installation. Likewise, the undulating form of the work will engage the existing park walkway and seating, allowing for continued access to the site throughout the two day event. 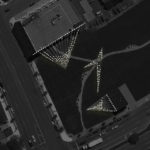 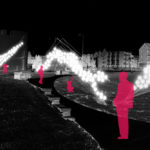 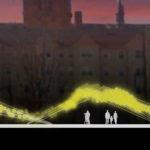