As we enter into the holiday season, let us also look to those in need. This week marks a country-wide call to do so, deemed National Hunger and Homelessness Awareness Week. For forty years, Gleaners Community Food Bank of Southeastern Michigan has fought hunger and nourished communities. Through their efforts and partnerships, Gleaners is able to distribute 79,000 meals each day and 34.5 million pounds of food each year.

In partnership with Gleaners and the American institute of Architecture (AIA) Detroit, Hamilton Anderson Associates along with other Detroit-area architecture and engineering firms are participating in CANstruction. This is a charitable art exhibition event featuring structures made of canned goods by teams of volunteers. At the end of the exhibit, all food is donated to Gleaners. It is an opportunity to marry art and necessity.

CANstruction 2017 marks HAA’s third year participating. Sponsors, including Kroger, SDI Structures, Hunter Pasteur Homes, Glen-Gery Michigan Masonry Supply, Coalesse, Knoll, Sachse Construction, LaSalle Inc, and Zoyes Creative Group, as well as HAA employees and personal donors contributed funds in order to purchase around 4,000 cans. These cans will be used as the building blocks for an incredible 7’x8’x6’ structure, using the “Imagine” theme. HAA’s structure will celebrate a historic Detroit landmark, the Michigan Central Station, while imagining its future. This historic landmark once served as the main inter-city passenger rail depot for Detroit. Connecting to the Michigan Central Railroad, it opened prematurely in response to a major ﬁre closing the doors of the original depot in downtown Detroit.

Now this station, too, is out of service. Whispers of restoration projects and plans have been heard on the wind, but none have yet come to fruition. It was once the tallest rail station in the world, and is still a Detroit Icon. The greatness of this hub has potential to bloom beyond memory.

Imagine life bustling once again in the station.

Imagine the station pulsing as an artery within the networks of Detroit.

Imagine the station acting in service to the community.

The structures will be displayed on Noel Night in the Welcome Center of Wayne State on December 2nd, and are open to public viewing and voting. At the end of the CANstructure displays, all of these cans will help provide local families with meals and hope through the efforts of Gleaners. 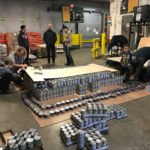 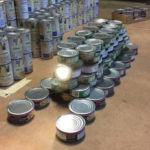 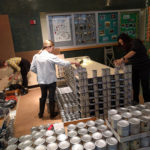 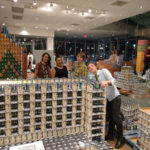 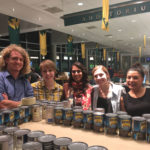 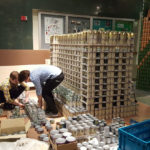 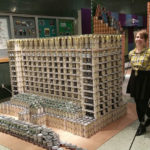