PROJECT. The Criss Angel BeLIEve project has been published in the March edition of CONTRACT design magazine.  The project is a re-design of the entry sequence into the theatre at the Luxor Hotel and Casino in conjunction with the debut of the newest permanent Cirque du Soleil show, Criss Angel BeLIEve.  Its opening in September 2008 provided a sneak-peak into the major renovations that will occur at The Luxor through 2009.  The 2.1M project began in October 2007 and opened for the public in October 2008.  Project scope includes a Box Office & Retail space of 6,000 square feet and Bar/Lounge of 14,500 square feet.

CONCEPT. By reflecting the enigmatic characters of Criss Angel and Cirque du Soleil, the architect’s call to action was to redesign the Box Office, Entrance, Retail Space and Theatre Bar/Lounge for the new dramatic experience.  This scope allowed a concept which considers the emotional mind-set of the audience as it approaches, spatially and temporally, the theatrical event.  The narrative of BeLIEve parallels Lewis Carroll’s classic literary work, “Through the Looking Glass,” as both pieces follow a protagonist’s journey into a whimsically absurd alternate reality.  In each piece, access to this other world is gained only through a very specific, yet different, threshold; one tangible (the looking glass), one experiential (an accident induced dream). Thresholds between levels of certainty, as literary premise inspired the architect

to consider a similar perception when designing the tangible space of (sub)conscious journey.  The architectural realization of this journey provides a sequence of spatial thresholds (stages) through which BeLIEvers are slowly submerged.  Passing through each stage means passing into progressive levels of engagement with the artist’s warped perception, the ultimate destination.

STAGE 1. At the brink of descent into a distorted reality, one is faced with severe contrast between the dense ruined fabric of casino activity and the stark austere Box Office of glowing translucent glass.  Following the glass into the Theatre Lobby demands following a forested path of confusing imagery meant to screen and reflect visions from the verge of the journey to its warped periphery.  A refuge parallel to the wooded path contains the comfortable reality of consumerism.  The Retail Space provides a clean, industrial contrast to the gothic Criss Angel fashions exhibited.  Concrete surfaces and metallic displays frame the ostentatious merchandise with distinction.  Here, a token of this voyage is irresistible as proof for a BeLIEver before resuming the journey.  Upon return one finds that the path through the shadowy woods ends by passing through a doorstep into the second stage of engagement.

STAGE 2. The space of The Next Room is darker, saturated.  The length of the corridor seems too precariously elongated to be functional.  Is this space within the forest?  The other side of the glass?  Portraits hang from the walls in baroque frames.  The images are familiar, alluding to both the past and future, but where is this present?  Unfortunate victims of a misguided hunter seem to be the subject of the hanging art, or do these frames focus one’s vision on an imminent potential?  Progress means passing over another threshold.

STAGE 3. In the Theatre Bar/Lounge, the space is almost opaque, grave, claret.  The low weight of the previous experience has rotated to provide a space of imposing skeletal bays.  This is the last of the spatial and temporal machinations before the final plunge into the gothic, Victorian elegance of absurdist theatre.  Glowing glass boxes of translucent light reference a safer stage of this journey; here they are places of refuge to lounge and drink.  The lush, momentous materials provide preparation for seeing into the distorted mind of the artist.  Even after the theatrical event, the journey is not complete.  BeLIEvers must re-merge by retracing their steps of descent to experience the antithesis of the original course.  In this sequence the spaces are grand, then tight, then wooded in a forest of imagery that now makes sense.  Near the end, one can finally sense friendly gaming because the last threshold is a gate back to the comfortable reality of the casino floor. 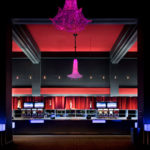 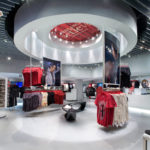 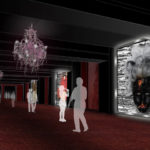 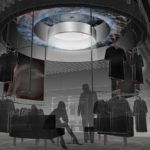