CONTEXT. Through great effort, Detroit’s sports venues and related organizations have attracted several highly desirable sports championship events.  Detroit recently hosted both the 2006 Superbowl XL and the 2009 NCAA Men’s Basketball Final Four Championship. These types of events create tremendous opportunities for their host cities to generate revenue and gain positive publicity. Hotels, restaurants, and retail stores all benefit greatly from the influx of spending, and while revenue estimates vary widely, the simple fact is that for cities such as Detroit, these are exceptional opportunities. Publicity is another asset to event hosting. According to one estimate, during the Final Four, Ford received as much as $22.5 million in publicity by having naming rights to the venue that hosted both events. Additionally, on a national scale, positive Detroit publicity is invaluable.

During both events, Detroit created a staged idealization of its urban experience; temporary bars opened in abandoned storefronts and the city lights blazed for one weekend. The riverfront and streetscapes were further animated by city-sponsored entertainment, including free concerts. The spectacle strategy is applied in many other host cities, in part, to provide comfortable urban environments for non-urban visitors. Alive with people, the city appeared occupied and marketable. Detroit excels at hosting such affairs, as evidenced by the success of these events, as well as the The Detroit International Auto Show, The Red Bull Air Race and The Detroit Belle Isle Grand Prix.

But every other day of the year, Detroit struggles. There is great need for viable, creative solutions to the many issues that face the city.  While greater investment, public safety, and schools are obvious long term objectives, as a starting point, street activity and beautification are critical components of a day to day urban vitality.

Accordingly, in preparation for the Final Four, the Downtown Detroit Partnership initiated a storefront design competition. Designers were charged with the creation of temporary installations in designated abandoned or unoccupied storefronts in downtown Detroit. The competition’s goals are generally understood as providing engagement, activating the street, and attempting to beautify abandoned buildings.

DESIGN AND INSTALLATION.  Within HAA, the storefront design competition involved a large group of volunteer design staff working within a span of four weeks. Constructive debate consumed the first half of the design schedule. Two approaches seemed appropriate. The first concealed a message through abstraction, and performed largely as ‘art as beautification’. The second centered on a decipherable concept, one of inspiration or motivation. Each approach designed toward a three dimensional installation and  sought to avoid specific themes that would be construed as a Detroit tribute piece.

Our research led us to investigate a number of installation artists, as well as graffiti and wall art in the urban context. The exciting work of artists/ designers Arne Quinze, Eva Menz, and Alexandre Farto drew particular interest.

Ultimately, the two approaches merged into a singular concept utilizing three dimensional pixelation, which achieved a level of abstraction while maintaining an interpreted message. By using a repetitive field of varying sized objects then organized to create a larger image, we achieved a multiplicity of experiences. From a distance, the design subject is legible (two faces), but if immediately adjacent to the installation, one experiences the storefront as an abstract field. The literal translation of a single part to a whole is used to further our message of the relationship between Detroit residents and the city itself.

‘Vacant storefronts are a constant reminder of a once devastated downtown. However, little by little, Detroit has found reason and ways to reinvent itself and build on the positive. Through determination and hard work, the transformation has and continues to take place. One individual can initiate change, and in doing so, cause others to act as well. It is the work of several that creates a single force.  Several spheres work together to create the single entity. From a distance, one can see faces that embody spirit. Perhaps, hopefully, one can see themselves. Up close, the face becomes an undulating plane, an artistic arrangement of elements that has a cohesiveness through simple proximity.’ 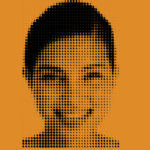 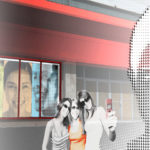 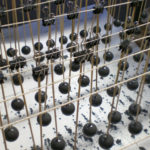 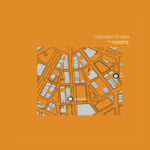 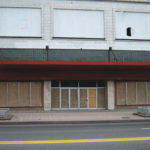 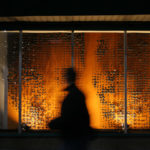