The Perforated Patterns of Lafayette Park – a rogueHAA installation From April 14th – 28th, the “INSIDE LAFAYETTE PARK” exhibition and multi-event design celebration captured an audience of over 1000 design enthusiasts and community members.  This rogueHAA collaborative event was co-curated by The University of Detroit Mercy School of Architecture (UDMSOA), Lawrence Technological University (LTU), and Wayne State University, and in conjunction with Preservation Detroit, The Detroit Area Art Deco Society, and the Detroit Creative Corridor Center.

At the core of the event was an exhibition, comprised of three distinct components of content:

In addition to the creation of the Black Bottom exhibition, rogueHAA was responsible for the exhibition layout and design. 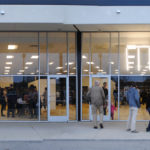 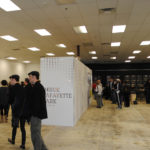 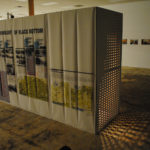 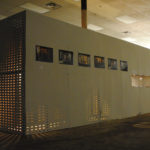 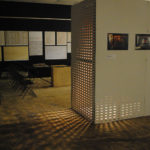 Working with a very minimal budget, the vacant store was first painted to complement the three components of the exhibition.  An “open” MIES sign was constructed of the most basic 4′ flourescent fixtures and hung from the ceiling.  An intermediary display wall was constructed using simple materials and sheathed with laser-cut panels.  Through the use of light and pattern, this installation sought to represent the paradoxical conditions surrounding Lafayette park. Conceived as a Modernist utopia for universal housing of the middle class, the Lafayette Park development was implemented through the displacement of entire working class communities. Yet despite the controversy surrounding its implementation, Lafayette Park has achieved many of the goals of Modernist planning and urban renewal, creating arguably one of the most vibrant and diverse neighborhoods in the city.  Likewise, the rigid architectural order of the living units as designed by Hilberseimer, Caldwell, and van der Rohe stands in stark contrast to the individual character of their inhabitants and their posessions. Within this unique architectural context, rogueHAA’s installation sought to deploy these discrepancies through a modulated perforation pattern within a strict overall grid.  The openings are located strategically to allow for both general lighting of the space as well as provide solid portions for the display of art. The alternating transparency and opacity of the wall surface allowed for views of both the structure within, as well as the exhibition content beyond.

Once again, rogueHAA would like to acknowledge the generosity of the Lawrence Tech makeLab, Gasser Bush Associates, Lafayette Foods, and the donors of Inside Lafayette Park for their contributions.